You are here: Home/ Why Play Rugby? 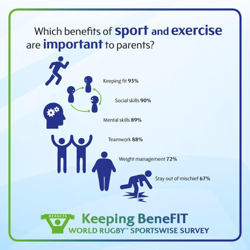 Keeping fit is the benefit that parents think of most when it comes to sports. Social and mental skills and teamwork also rate highly. Two thirds of parents even say sports keep children out of mischief.

Results from the World Rugby Sportswise Survey have revealed that while parents are understandably concerned about injuries, 92 per cent feel that the benefits of children playing sport far outweigh these risks.

The results come at a time when inactivity is reported to be responsible for more deaths than obesity and that eliminating inactivity in Europe would cut mortality rates by nearly 7.5 per cent (1). At the same time recent research has suggested that teachers believe 39 per cent of children across the UK leave primary school with a negative attitude towards being physically active (2) and almost one in four (23 per cent) children believe video games to be a form of exercise (3). At the same time, there have also been questions raised recently regarding the safety of sport for children and specifically about player welfare and safety in rugby at all levels of the game.

More than 80 per cent of parents surveyed in the UK and Ireland say that they have never prevented their children from participating in an activity due to the risk of injury and even for a contact sport like rugby, the vast majority of parents are still happy for their kids to play contact rugby, including nearly eight out of 10 of parents with boys who are of tackling age.

Dr Colin Michie, Paediatrician at Ealing Hospital and Chair of the Nutrition Committee at the Royal College of Paediatrics and Child Health, said: "The results of this survey are reassuring as the large majority of parents see the benefits of their children playing sport and aren’t stopping them from doing so in case they hurt themselves. With rates of inactivity among children increasing and the effects this has on health and obesity, getting children and teenagers moving has to be a priority. Team sports such as rugby are particularly good for youngsters. They not only improve fitness but crucially develop social skills including tolerance, leadership, concentration, determination, teamwork – and, of course, how to deal graciously with success or defeat."

World Rugby’s number one priority is player welfare and the global governing body continues to be committed to making rugby as safe and enjoyable as possible for all ages through education and promotion of correct preparation and playing techniques, prevention strategies and minimizing and managing the risks associated with one of the world’s fastest-growing team sports.

Education is making an impact with 47 per cent saying that they are more aware of injuries and concussion than five years ago, but importantly 63 per cent say that their level of concern has actually remained the same or decreased. This may be due to confidence in current safeguards with 84 per cent of parents believing sufficient measures are taken by schools and sports clubs to protect children against injury during sports and activity. This is driven through initiatives like World Rugby’s Rugby Ready programme which educates children, coaches and parents on best-practice tackling, contact techniques and preparation to help prevent injury. World Rugby's Rugby Ready programme has reached more than 1.1 million people and trained 300,000.

There are several misperceptions about the risk of rugby. For example, 59 per cent of parents surveyed think that most sports/activity injuries are caused by rugby, compared with 30 per cent for horse riding and skiing, and 28 per cent for ice hockey. However compared with other sports and activities, rugby has a relatively low injury rate despite being known for the physicality of the game. In fact, research has shown that rugby is no more risky for children to play than other sports – there is no difference between reported injury rates in rugby, football, indoor football and rugby league at under 12 level (4).

World Rugby Chief Medical Officer Dr Martin Raftery said: "Player welfare is the number one priority for World Rugby. We are continually undertaking research to try to reduce and remove risks from the game. This new research will inform our campaigns and education moving forward. While we are making positive progress, there is still a way to go. Our aim is to make rugby as safe as possible at all levels and to lead the way for all sports."

World Rugby is setting the standards in terms of concussion and player welfare as evidenced by other leading sports (Rugby League and Australian Football/AFL) adopting its latest head injury management removal from play criteria. Rugby League is also using World Rugby’s concussion education modules and many US and NFL teams are looking to learn from rugby about how to make tackling techniques safer and reduce injuries. The Scottish government also recently adopted World Rugby’s public education guidance. Visit playerwelfare.worldrugby.org/concussion.

Another key focus is anti-doping education. Thirty-five per cent of parents say the risk of children taking supplements is important to them. World Rugby’s Keep Rugby Clean programme focuses on educating players about the importance of staying clean and raises awareness of inadvertent doping – World Rugby operates a zero tolerance policy on doping. Visit keeprugbyclean.worldrugby.org.

For the first time in any international sporting event, World Rugby has introduced the Rugby World Cup 10-point player welfare standards programme, and will also be using Hawk-Eye’s SMART Replay technology to provide team medics with a 360 degree view of any incidents to help assess severity of injury immediately and the best course of action, particularly for potential concussion.

World Rugby Chief Executive Officer Brett Gosper added: "We are committed to becoming the leader in all sports when it comes to player welfare. Rugby is a game for everybody; different types of the game suit different people with different skills and body shapes and sizes. Beyond contact rugby, we offer a wide variety such as mini, tag, touch and beach rugby. The goal is to get people involved and inspired – hopefully starting with the success of Rugby World Cup 2015. With that we are striving to ensure the game is as safe as possible not only in terms of injury prevention but all elements of player welfare and are looking forward great tournament."